rich influencers. liars. perverts. sanctimonious people. politicians (they are all the previous 3 things). asinine internet discourse that doesn't impact the real world. tiktok. people who want to buck columbine guys and other murderers. TERFs. incels. eating. old british people on twitter. state defenders. teens who seem to be addicted to hating select people online. most of all, myself; it's disgustingly edgy, but i'm trying to combat it. 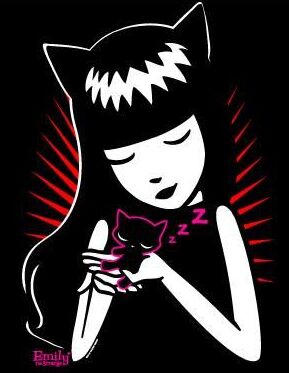 Nicknames: Nothing. Alternatively, my initial.

Where Do You Live Now?: Still a Britbonger, unfortunately.

Looks: 5'4"; blue-grey eyes; black bob hair; far too thin and pale, according to some people.

Favorite TV Show(s): I prefer online videos, but I liked Daria. The Ren and Stimpy Show and Spongebob are also sentimental to me.

Favorite Kind(s) Of Music: Industrial; anything that makes me feel depressed and euphoric at the same time; whatever kind of music Poppy is.

School: I dropped out of uni lol. The subject I picked was way too academic and intensive for me to adjust, and I was being disheartened every time I breathed there. I couldn't take that for any longer than I did.

Future School: I applied to do fashion marketing and branding at a local university and I'd be starting in September 2022.

Future Job: I'm fine doing anything that earns me good money. Obviously I enjoy working with visuals and the like, so something in that direction would be boss.

Boyfriend/Girlfriend: Technically, no. but uh

Best Buds: I have two or three people I consider good friends, but my bestest friend comes and goes.

Hobbies: Writing, fashion, thinking deeply about random shit, reading to widen my knowledge wherever I please, and designing stuff like this site. I used to make music all the time for years, but it got exhausting and I lost interest.

Things You Collect: Angels, merch of two very speicfic characters that would be too identifiable if I named, general weird shit, lolita brand clothes from the early 00s, Gothic&Lolita Bible issues.

Do You Have A Personal Phone Line: This questionnaire is ever so slightly dated.

Favorite Body Part Of The Opposite Sex?: Brains.

Any Tattoos And Where Of What?: None, but I want a little butterfly on me somewhere.

Piercing(s) And Where?: One on each ear lobe and one on my right nostril.

What Do You Sleep in?: Just my undies, because I manage to overheat under my duvet no matter the season. Unless it is that cold, then a slip nightdress.

Do you like Chain Letters: They make me laugh.

Best Advice: "Do what thou wilt shall be the whole of the law." Follow your true will. Draw attention to what separates your impulses and fleeting wants from what your true will beckons for, and don't let anyone or anything push you elsewhere, unless your will agrees entirely. This will make decision-making and just living life a whole lot smoother with less regrets.

Non-sport Activity You Enjoy: This implies that I enjoy sport, which I absolutely do not. I like walks, though.

Dream Car: One of those big boxy ones from the 90s.

Favorite Thing To Do In Spring: Hang out with people I like and use my computer.

What's Your Bedtime: Whenever I manage to fall asleep, which is either an insanely difficult task or it happens involuntarily.

Where Do You Shop?: eBay, Mercari and the edgelord containment stores in town.

Coke or Pepsi: I only drink water and lemonade.

Favorite Thing(s) To Wear?: I dress like a mysterious estranged gothic lolita from the early 2000s, or if I feel like putting less effort in, an angsty western goth girl from the 90s.

Favorite Color(s): Red > black > white > purple = pink > army green. I have thought about this a lot.

Root-Beer or Dr. Pepper?: I only drink water and lemonade.

Do You Shave?: When I can be bothered.

Favorite Vacation Spot(s): None in particular, but I'd like to travel more inside my country.

Favorite Family Member(s): My dad is the least offensive.

Did You Eat Paint Chips When You Were a Kid?: Not that I'm aware of.

Favorite CD you own: Bad Religion - Recipe for Hate; Poppy - I Disagree and Flux; KMFDM - XTORT and [symbols].

The ONE Person Who You Hate The Most: No one is particularly bothersome at the moment. I don't actively hate anyone I'm in contact with right now, I'm just bored of almost everyone.

Who Is The Hottest Guy or Girl In The World?: Guy: M⁎⁎⁎⁎⁎. Girl: Winona Ryder, circa 1990.

What Is Your Favorite Salad Dressing?: None.

When You Die, Do You Wanna Be Buried or Burned Into Ashes?: Burial; either a small and secluded grave, or with my grandmother.

Do You Believe In Aliens?: Of course.

If You Had The Chance To Professionally Do Something, What would You Do?: Act? Be an occultist? I don't know anymore, I don't enjoy doing anything in the context of a career.

Things You Obsess Over: They change weekly, but I might add some persistent obsessions to the hearts page.

Favorite Day of the Week: Whichever day I end up having the most shared free time with him.

A Teacher You Hate: My old drama teacher from secondary school had a 5-year-long personal vendetta against me. Her name alone provokes primal rage within me. If I ever saw her again, I would probably lose control and slap her in the face.

Favorite Disney Movie: I'm not really a fan. As a child I loved Snow White, though.

What Is Your Favorite Season?: Spring or Summer.

What Toppings Do You Like On Your Pizza?: Pepperoni and chilli peppers.

Do You Like Your School Food Itself (As In The District Food): At sixth form, I only ever tried it once. I had a pasty, and it was very overpriced and not so good. I think there was a hair in it, too. As for secondary school, I don't remember.

If You Could Live Anywhere, Where Would You Live?: A nice enough house closer to my city, because I actually like it. Or a similar city in Britain, because sometimes I want to escape a lot of the people and experiences I've had here. Maybe London? Or in an alternate reality, where simply breathing in London doesn't put you in debt.

Favorite Thing(s) To Do On Weekends: Go for walks, go out with friends, meditate, read, drink water etc.

Favorite Thing(s) To Get Clean up: What?

What Kind of Guys/Girls Are You Attracted to?: Just one person.

What's Your Most Embarrassing Moment?: Most of secondary school.

If You Could Change One Thing About Yourself What Would It be?: My nose. it's butt ugly.

Do You Eat Breakfast First Then Brush Your Teeth or Brush first ten eat breakfast: Who the fuck eats breakfast after brushing their teeth?!?! Not only will that shit taste weird, but you get your teeth dirty immediately after brushing them. Disgraceful.

Favorite Time of Day: Coming home in the evening and being able to relax, either in solitude or through giggling with my friends online.

Can A Guy and Girl Be Just "Best Friends?": Yes, but it takes a lot of strength if you both like each other.

Do You Ask The Girl / Guy Out Or Do You Wait For Them To Come To You?: It's always just naturally happened for me, without anyone asking each other out.

Do You Mind Paying For Sex?: I'm pretty sure I'm demisexual or graysexual or whatever it is, so it wouldn't serve me any purpose.

What's The Most Important thing In Someone's Personality: Transparency, compassion and the ability to be self-critical and poke fun.

Do you have a pager or cell phone?: A smartphone.

What Was the Best Gift You Ever Received?: The laptop I'm using right now.

How Long Did This Letter Take You To Finish?: Initially, like an hour and 20 minutes. I thought it'd be shorter, but I didn't get as much sleep that night.

What Did You Listen To While Completing It?: The wind outside.

Are you or would you like to be married in the near future (next 5 years)?: I think marriage in the legal sense is nonsense, but if me or a potential forever partner would benefit from it in any way, I'd do it.

Don't u just hate how psychics never win the lottery?: Lottery is a tax on the poor; psychics are full of shit.

Be strong, o man! Lust, enjoy all things of sense and rapture: fear not that any God shall deny thee for this.